Art and sustainability: a tale of tragedy and resilience

The active and essential role of art in today’s landscape

Art has a political agenda? So be it. Now more than ever we need an ally in fighting the tragedy that humanity’s inflicting on the planet. And what better tool than art, the most powerful ally when it comes to representation.

Thinking of the environmental challenges yet to overcome, it’s no surprise that artworks have been leaning on strong critique and condemnation. It’s all part of this recent sentiment, pushing people to be ‘woke’: there’s no escape from that reality we are creating for ourselves, and we have to stop looking at the bright side.

It was only last September when a giant clock was installed in Union Square, New York. This Climate Clock is very much so a work of art: not one meant to shock you or let you in awe, not even one screaming for the incoming end of the world looming upon us.

It’s not that we ran out of time; it’s that our time to turn things around is limited – and it’s precisely less than 6 years. And while we continue walking this Earth unscathed, a ticking bomb is keeping the beat of our negligent steps.

Art and environmental issues have been intertwining for a while now, and they have been widely recognized as an intriguing duo – so much so that the ArtVerona decided to create a whole category to it.

The Sustainable Art Prize is up for grabs every year: in 2018, it went to artist Gayle Chong Kwan. Gayle had the chance to collaborate on a project called “Waste Matters”, which had as its artistic focus our irresponsible everyday consumption and waste production.

It wasn’t the first time that this artist explored the dramatic effects of today society’s on nature, and it wasn’t going to be the last: in 2019, Gayle created a piece called Wastescape. In her vision, trash is never the end object, but always the mean: waste can be turned into an artwork both as the main body and the messenger.

With six thousand empty plastic milk bottles, she brought to life a surreal landscape, that burst out of the ceiling like stalactites, invaded corners and emerged from the floor. Wastescape stood as a reminder of the effects of the intensive dairy industry on water, in New Zealand, with more and more Co2 emissions being produced and the ecosystem being forever changed.

The Survival Architecture and the Art of Resilience

Art can be a violent rioter as much as a whimsical mediator. With our world changing fast before our eyes, the ominous feeling of an incoming apocalypse doesn’t belong only to tacky movies anymore.

Cities and governments are pushed to face the consequences of climate change and ecosystem transformations more frequently than ever, forced to rearrange the landscapes and come up with efficient solutions.

In some parts of our planet, fishing and farming are at stake, water is a long-gone dream, or a deadly reality if we think about the rising sea level. And while government might not have a brilliant strategy yet, artists and architects gave their best shot with the project Survival Architecture and the Art of Resilience.

The exhibition lets you wander among cricket-shaped shelters, emergency pods, floating cities and super resistant up-cycled coats. Here, a gloomy feeling weirdly marries with a sense of hope. There might be genius tricks to steal here, but the main sentiment calls out to the urgency of acting, stat. Surely, you can never be too prepared; but is this really the world I want to be welcoming?

Perhaps the key to wake people’s consciousness is to reconnect them with nature. One of the most famous world artist, Olafur Eliasson, does exactly that which every one of his pieces. He’s one of the most vocal artists on environmental changes, incorporating sustainability not just in his final pieces, but also in the process of creation.

In 2018, Olafur installed gigantic blocks of ice in London, fishing them from the sea after they had fallen off the Greenland ice sheet. The artwork was meant to melt away in the blink of an eye, but the statement remained, strong and loud, in the air.

The artist wanted us to fight our numbness, to touch the ice, dance around it and rejoin our sacred bond with the world. By enforcing the narrative of climate change into something so concrete and close, Olafur hoped that “we recognized that together we have the power to take individual actions and to push for systematic change”.

He pushed it even further with the exhibition Sometimes the river is the bridge, which turned the effort of creating sustainable artwork into art itself. Olafur and his team did not just want to speak about sustainability – they actually followed and provided a whole set of guidelines, a blueprint to improve your footprint when selecting artworks and organizing an exhibition.

Apart from picking art pieces only made with recycled and upcycled material, they constantly kept their eyes on their carbon footprint: “the goal was to really look into all the aspects of what we do, from waste management to how we produce to the way we do our planning for projects, how much we travel to different countries and how we get things there”. 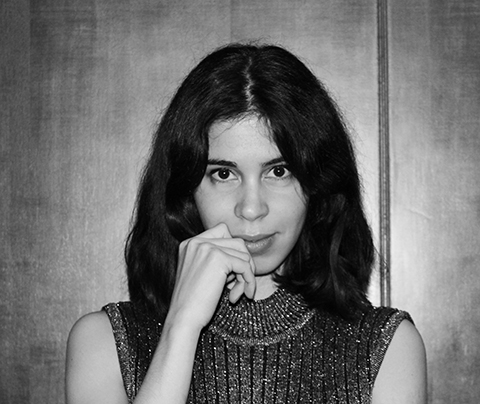 Giada graduated with a degree in Cultural and Linguistic Mediation (Unipd) and obtained a MA in Media Studies (Leiden University). She works as a freelance copywriter and translator, and as a content creator for a platform on digital nomadism. She’s worked for Inditex and other similar brands for several years, witnessing the cruel reality of fast fashion on a daily basis – something that motivated her to participate in Atmosphera lab.

The design of climate change

Art and sustainability: a tale of tragedy and resilience

The cost of fast fashion